Surrounded by beautiful landscapes, Zaisan Monument is an integral part of the nation’s history, located in the south of Ulaanbaatar City, right between the Tuul River and the Bogd Khan Mountain. 300+ steps to the top of the hill and you have a chance to enjoy the most impressive panoramic view of the city and the four sacred mountains that surround it - Bayanzurkh, Chingeltei, Songinokhair Khaan, and Bogd Khaan.

The Zaisan memorial was constructed in memory of Soviet soldiers killed during World War II. It represents several constructions: a circular memorial painting and the legendary tank T-34 monument. On the left of the hill, you can find a religious complex with a 15 m high gilded Buddha statue.

This place combines the recent Soviet past of Mongolia and traditional Buddhist beliefs. The fantastic view of the city with the splendid mountain backdrop, both during the day and night, makes this place essential to visit. 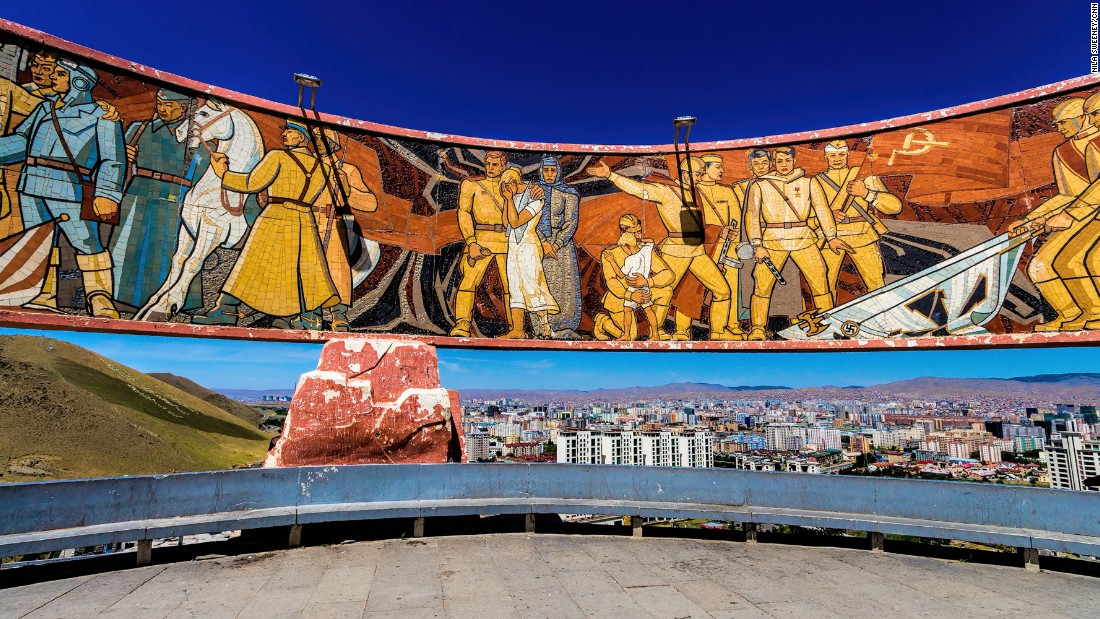 Located on a hill in the southern section of the city, the Zaisan Memorial honors friendly Mongolian and Soviet soldiers killed in World War II. It has a circular memorial painting that shows moments of brotherhood between the nations of the USSR and Mongolia.

The monument's exterior wall is modeled after a traditional Mongolian fireplace, which represents life. The mural depicts scenes like Soviet support for Mongolia's independence declaration in 1921, Soviet triumph over Nazi Germany, and Soviet defeat of the Japanese Kwantung Army at Khalhkin Gol on the Mongolian border in 1939.

A 27-meter-tall statue of a Russian soldier clutching a triumph flag in one arm and a machine gun in the other is part of the Memorial wall. A smaller circular plinth that houses the earth from the revolutionary conflicts that took place in Mongolia, including Altanbulag, Tolbo Lake, and Khalkhyn Gol, is located inside the Memorial's outer wall.

If you look closely, you will see that this base has a hole through it that once served as an eternal flame but is now only used for special occasions such as holidays.

To commemorate the 25th anniversary of the Mongol Tank Brigade, this memorial was built.

The Red Army collected the finances contributed by the people of Mongolia during World War II and used them to construct this detachment, which eventually became the revolutionary Mongol tank brigade.

The genuine T34 tank, which participated in every significant combat from Moscow to the decisive triumph in Berlin, was revealed as this monument on Victory Day, May 9, 1968. The pedestal displays the tank's eight combat awards and guards' citations.

The Mongolian Golden Soyombo logo may be seen on the pedestal's front. The "Revolutionary Mongolia" tank brigade, which was funded by donations from the Mongolian people, took part in the conflict with Hitler's Germany, according to Mongolian.

Things To Keep In Mind When Visiting Zaisan Monument

How To Reach Zaisan Memorial Hill

You can hire a taxi or take the community bus to reach the Zaisan hill complex. Keep an eye on your possessions, especially if the bus is boarding in a crowded area. The bus stops outside of the Chingis Orgon Road location of the Mongolian library.

The library is located about 200 meters south of Suhkbaatar Square on this road, which follows along the west side of the square. The bus rides for about 2 miles to the memorial's base. The bus simply travels straight south down the road, crossing the long Peace Bridge, which also crosses some abandoned land and railroad tracks, and finally the bridge over the Tuul River.

The Zaisan memorial lies 200 meters past the river and 100 meters down a side road to the left. If you visit Mongolia, take this destination on your travel list around Ulaanbaatar.

Visit the Zaisan Memorial if you're looking to locate things to do in Ulaanbaatar. Combining Zaisan with a trip to the Bogd Khan winter palace museum, which is located along the same route, can take up a fair number of hours. Those who enjoy exercise may want to take the bus to the memorial and then walk back into town through the museum (approximately 2 km/ 1.3 miles), enjoying the scenery along the route along the two bridges.

When was the Zaisan monument built?

The Zaisan Memorial, built in 1956, honors allied Mongolian soldiers and World War II casualties among Soviets. Additionally, it acknowledges the friendships and accomplishments of the Soviet Union as well as the Mongol people shared.

Russians erected it as a memorial to Soviet soldiers who died in World War Two. An enormous concrete ring that is elevated roughly 5 meters from the ground contains a tiled mural. Because of the breathtaking views, it provides of the city, Zaisan is a well-liked tourist destination and is among the attractions of Ulan Bator.

What are nice Coffee shops and Restaurants around Zaisan Monument?

Around Zaisan Memorial, there are many coffee shops and restaurants. A few of the delicious include Veranda, ROC Caffeine Bar, Tom N Toms, Asiana, and London Pub.

What is the best time to visit Zaisan Monument?

The best time to visit the Zaisan memorial is at sunrise and sunset. During these times, you will get an opportunity to look and wonder about the vistas from uphill and take beautiful shots of the surrounding.

What can I see and do near Zaisan Memorial?

Explore the exhibits of the Mongolian Natural History Museum, Bogd Khaan Palace Museum, or the National Museum of Mongolia. Visit the Golden Temple, Gandan Monastery, and Choijin Lama museum while you're out touring to discover more about the region.