Mongolia, the land of Genghis Khan consists of numerous historical and cultural places. After you touch down Mongolia's capital ulan bator, the first thoughts that come to your mind are what to explore here and where are the best tourist destinations.

You might have planned your tour before coming to Mongolia. If that's the case, did you add Ulaanbaatar Sükhbaatar Square to your destinations list? If not, let me tell you why you should pay a visit to this central square when staying in ulan bator. 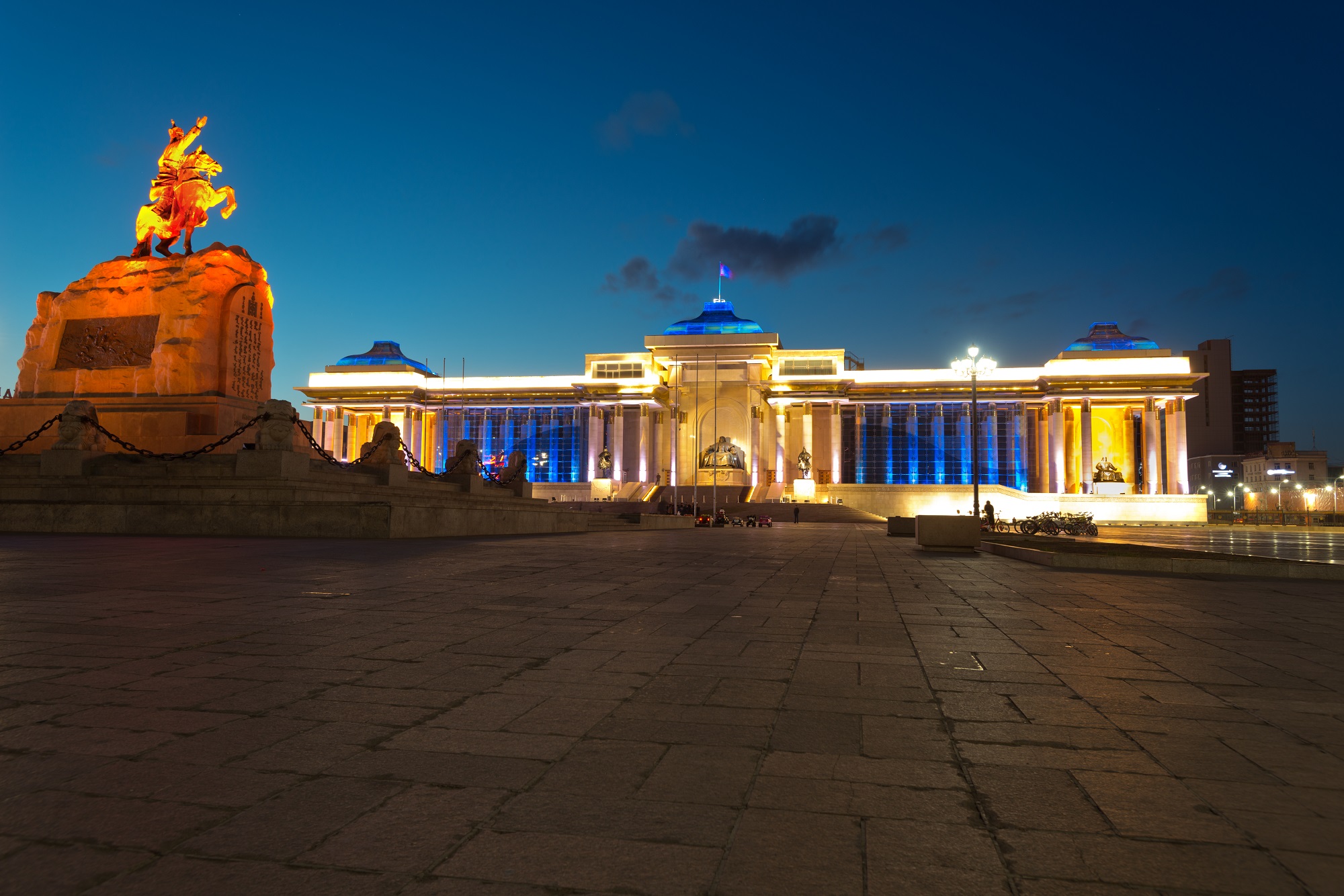 Located in the heart of Mongolia's capital Ulaanbaatar, Sukhbaatar square reflects the spirit of modern Mongolia and impresses it with its tremendous size. The square is named after one of the leaders of Mongolia's 1921 revolution Damdin Sukhbaatar, who is a revolutionary symbol of independent Mongolia. His equestrian statue features the center of the square. The original name was amended in 2013 to honor Genghis Khan, regarded as Mongolia's founding father, and then changed again in 2016.

Here you will see the Government House, religious sites, a bronze colonnade monument to Genghis Khaan, the Mongolian stock exchange building, the State Ballet, the Central Post Office, the Opera House, the Gallery, the Blue Sky Tower, and a number of other buildings. The beautiful Parliament building and a huge monument to Genghis Khaan, surrounded by skyscrapers, are an interesting contrast to the historic past and the present of the country.

Besides, Sukhbaatar square is the main venue for state ceremonies, national holidays, and cultural events. A good place to sit and contemplate, the best place to view the city skyline from ground level. Especially beautiful at night, many families with their children congregate here on this huge plaza but the large statue of Genghis Khaan is the highlight.

This equestrian monument, which was built in 1946, honors the revolution's 25th anniversary. It shows Sukhbaatar, a young rebel, riding a charging horse. He is calling his people to battle while pointing above.

Significantly, when Sukhbatar did visit Russia, he brought with him a letter addressed to Lenin that was hidden inside a hollow whip and begged for support in the country's fight for independence.

Mongolians will continue to come for family and group portraits. There are always folks with cameras who are eager to take pictures for a fee and sell a few paintings. The statue is flanked by electric bicycles, and rental cars for colorful young children, and couples.

Up until 1989, Sükhbaatar Square dedicated to Damdin Sükhbaatar served as the location of annual civil, youth, and military parades during Mongolia's socialist period. Party and government leaders would climb to the top of Sükhbaatar's Mausoleum to view parades of state ceremonies on May 1, July 11, and November 7 of every year. For significant guests, such as Brezhnev's formal trip to Mongolia in 1966, large parades were also put up.

The area served as the focal point of the Democratic Revolution of 1990, which saw massive demonstrations of peaceful anti-communism protests, and hunger strikes. Intense rioting over the results of the parliamentary election took place in Sükhbaatar Square on July 1, 2008.

The square is the central square in Mongolia and continues to host major state ceremonies, even rock concerts, cultural gatherings, and exhibitions today. Foreign heads of state, and important visitors typically pay their homage in front of the statue of Damdin Sükhbaatar on their official visit.

What To See In and Around Sükhbaatar Square

A massive statue of Ghengis Khan is positioned in front and center of this enormous monument, surrounded by his third son Gedei Khan as well as his grandchild Kublai Khan to the square's north. Two horse-mounted warriors named Muqali and Bo'orchu are guarding them against both sides and these two were the most devoted generals to Genghis Khan.

Government House is also located at Sükhbaatar Square. A large ceremonial ger is located in the building's interior courtyard and is used to receive distinguished guests.

The square is transformed into a military parade for special occasions and when hosting visiting dignitaries, with military troops standing post, marching, or riding their steadfast Mongolian horses to mark the occasion.

The Cultural Palace, an important landmark east of the center that houses the Mongolian National Modern Art Gallery plus various other cultural corporations, is a Soviet-style building from the 1970s. The State Opera & Ballet Theatre is the salmon-pink building on the square's southeast corner. The Central Tower, which houses upscale stores like Louis Vuitton and Armani, is located just south of the opera house and serves as a symbol of the nation's recent prosperity.

When to Visit Sükhbaatar Square

Although Sükhbaatar Square is quite beautiful at night when it is illuminated, the weekend is when it has the friendliest vibe and is the ideal time for people to enjoy. At New Year's and during the Naadam Festival, expect spectacular events (July 11–15). See also, What's the weather in Mongolia.

When was Sukhbaatar Square built?

What are nice places around Sukhbaatar square?

The Nice and beautiful attractions around Sukhbaatar Square are:

Where can I park around Sukhbaatar Square?

When visiting Sukhbaatar Square, you can park your vehicles in Central Tower Basement, and outside Bluesky Hotel.

What are the nice restaurants around Sukhbaatar square?

One of the finest and most beautiful restaurants around and near Sukhbaatar Square are:

You can also find delicious restaurants in Central Tower like:

You must also go and check out Wall Street Restaurant & Lounge in Bluesky and Zoma Kitchen & Bar.

Why is Ulaanbaatar famous?

As the capital of Mongolia, Ulan bator serves as the financial, industrial, and cultural hub of the country as well as the hub of Mongolia's transportation system, with rail connections to both the Chinese and Russian railway networks and the Trans-Siberian Railway in Russia.

What is the capital of Mongolia?

Ulaanbaatar is the capital of Mongolia.