A single family ruled a geographical empire that spanned 23 million square kilometers (nine million square miles), from East Asia to Europe, for more than 100 years. The Chinggis Khan (or Genghis Khan) Dynasty, from which that family derived from the legendary warrior Genghis (sometimes spelled Chinggis) Khan, ruled for a period of time.

The ferocious Mongolian warrior Genghis Khan is recognized by the outside world for the atrocities and devastation he inflicted upon the invaded countries, which resulted in the deaths of 40 million people. Genghis Khan divided the known globe in two during the 13th century. But he remains a national hero, a mythical figure, and a representation of Mongolian culture to Mongolians, and for good cause.

The Mongol Empire was established by Genghis Khan, who also revitalized the Silk Road, brought together warring tribes, and cemented the Mongols' place on the geography of the globe. The Mongol Empire grew to become the greatest contiguous empire in history. 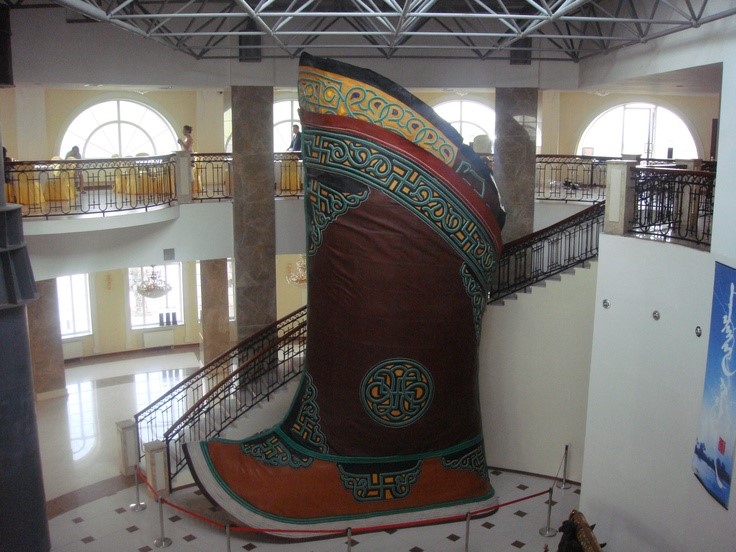 More than two decades ago, when the communist government in Mongolia was overthrown, a plethora of monuments and merchandise honoring the well-known figure known as Chinggis Khaan began to sprout.

Chinggis Khaan International Airport, Chinggis Khaan University, and the Chinggis Khaan Hotel are all located in Ulaanbaatar, the capital city of Mongolia. His image can be seen on a variety of commonplace items, including sweets and liquor containers, as well as on currency.

Located 54 kilometers away from Ulaanbaatar city, The Genghis Khan Equestrian Statue (Tsonjin Boldog Complex) is considered the world's largest equestrian statue and the largest horse-riding statue in the world. It was built here, so the legend goes because this was the spot where Chinggis Khaan found a golden whip. The complex includes an impressive museum (with Hunnu artefacts and items from the Mongol empire), a cafe, and a souvenir shop.

Being a part of the Genghis Khan Statue Complex, 40 meters (130 ft) tall equestrian statue of Genghis Khan on horseback, was established in 2008 and made of 250 tonnes of stainless steel. The base consists of 36 supporting columns, representing 36 great Khans (Mongol kings) with the entrance gate to the complex being decorated with statues of the nine generals (noyons) of Genghis Khan. Be sure to go to the head of the horse through its chest and neck for a panoramic view of the surrounding landscape from the observation deck.

The project's designers intended to make the Chinggis Khaan statue become an iconic representation of Mongolia, much like the Eiffel Tower represents the French, the Statue of Liberty represents the Americans, the Great Wall represents the Chinese, and the Taj Mahal represents the Indians. The expectation in Mongolia is that this complex would give the country's tourism sector a fresh look.

In addition, you can see the amazing archaeological findings at the Mongol Empire history museum, have the opportunity to wear the king's and queen's costumes for family photos, or simply get fascinated by one of the world's biggest Traditional Boot with a height of 9 meters.

Budget at least 1 hour, but 1.5 hours to be more sufficient. It's about a 1-hour drive from Ulaanbaatar, along the way, you would see the track of the trans-Siberian railway, Mongolian ger (tents), and if you are lucky, some herds of sheep/goats, etc.

If you are visiting Tsonjin Boldog Complex, consider combining it with a visit to Gorkhi Terelj National Park at the same time or some horse riding trip.

Mongolia's largest statue of a man riding a horse - the statue of Chinggis Khaan (1162-1227) holding a golden whip in his right hand and staring off into the distance was created at the Tsonjin Boldog site, which is associated with many historic events. The site is located in Erdene soum, Tov aimag.

In this instance, Temujin (Chinggis Khaan's childhood name), who overcame hardships in his youth when he lost his father, discovered a whip on the journey back from Khereid's Toiril Khaan, where he had traveled to plead for assistance when Mergid had kidnapped his wife in 1117.

Mongolians consider the discovery of a whip to be a lucky omen. So when Chinggis Khan discovered the whip, he got envious, believing it to be a door opening to the noble cause.

Visitors will use an elevator at the horse's back to elevate to the exhibition hall, and then they will walk to the horse's head, crossing through its chest and the rear of its neck, from which they will have a spectacular panoramic view of the surrounding area and the surrounding landscape. For today's modern people, 13th Century lifestyle will be brought to life within the complex region, which spans 212 acres.

Where is the Chinggis Khan statue?

It is situated there, where he supposedly discovered a golden whip, on the bank of the Tuul River in Tsonjin Boldog, 54 kilometers (33.55 miles) east of Ulaanbaatar, the capital of Mongolia. In a symbolic gesture, the statue is symbolically pointed east toward the location of his birth. The complex features an underground museum along with a huge equestrian statue of Genghis Khan. Explore this giant statue with the giant boot when you visit Mongolia.

Why was the Genghis Khan statue built?

Genghis Khan, the first Great Khan (or Ruler) of the Mongols, is considered to be the greatest legendary Mongolian to have ever lived. He developed cities, destroyed countless forces, and built the most continuous empire the world had ever seen. He caused the entire planet to shudder.

From approximately 1158 to August 18, 1227, Genghis Khan lived. Temüjin was his birth name, and as a little child, he was forced to flee from various Mongolian tribes. But finally, he was able to subdue the resistance, bring them together, and then launch an invasion of historic China and even beyond.

The Mongolian conquests would eventually reach Poland and Egypt in the south. A Mongolian offshoot kingdom known as the Golden Horde controlled Russia for many centuries.

It would seem strange to erect such a massive monument in his honor given how the globe recognizes Genghis Khan. But unlike most of the remainder of the world, the Mongolians have a different perspective on him. For Mongolians, he is a National Hero and that is the reason they built the giant Genghis Khan statue Complex.

How can I visit the Chinggis Khaan Statue complex? (by rental car 1hr drive from Ulaanbaatar)

Chinggis Khaan statue complex is not very far from the Mongolian capital ulaanbaatar. You can hire a car from car rentals in Ulaanbaatar. The statue is only an hour's drive from Ulaanbaatar.

When was the statue of Genghis Khan built?

Genghis Khan (r. 1206–1227 CE) is displayed here in a 131-foot (40 meters) tall horse statue that was constructed in 2008. The statue is located atop the Genghis Khan Statue Complex, which is located close to Ulaanbaatar, the Mongolian capital, on the bank of the Tuul River.

Where is the huge statue of Genghis Khan?

It is situated there, where he supposedly discovered a golden whip, on the bank of the Tuul River in Tsonjin Boldog, 54 kilometers (33.55 miles) east of Ulaanbaatar, the capital of Mongolia. In a symbolic gesture, the statue faces east toward the location of his birth.

How big is the Genghis Khan statue?

The statue is covered in 250 tonnes of dazzling stainless steel and is 40 meters tall. The statue is located atop the Genghis Khan Statue Complex.

What is the Genghis Khan statue made of?

The 250-ton Ghengis Khan statue, which is 40 meters tall and atop a visitor center, gives the overall impression that it is considerably taller because it is constructed of steel. Each of the 36 pillars in the center represents one of the famous historical Mongolian Khans.

Who built the Genghis Khan statue?

It was created by the architect J. Enkhjargal and the sculptor D. Erdenebileg, and it was built in 2008. The Genghis Khan Statue Complex, atop a tourist center that is 10 meters (33 feet) tall and has 36 columns that represent the 36 khans from Genghis to Ligdan Khan, is where it is located.

Petroglyphs in Zuraa in Uvs