Home / Blogs and Articles / Stunning Landscapes and the Most Beautiful Drone Videography in the World? Mongolia’s Gobi Desert is Your Place

Chances are, you already know Mongolia is stunning.

From movies to magazine spreads to content creators such as Adventures of Blondie, an FAA Certified Drone Pilot and explorer whose White Stupa footage went viral (it was watched more than 10 million times!), there’s no shortage of media showing off all the beauty this place has to offer.

But, what about the Gobi Desert in particular? Stretching from parts of northern and northeastern China to the southern reaches of Mongolia, the Gobi Desert was first made famous thanks to the traders who crossed it by way of the Silk Road. Still, it’s the fantastic drone videography that’s been capturing the hearts of travelers, journalists, filmmakers, photographers, and videographers as of late that make it a place to not only explore – but one of the best places in the world to capture on film.

About the Gobi Desert, Mongolia

As the sixth-largest desert in the world and the second-largest in Asia, the “Gobi,” as it’s usually called, measures over 1,600 km (1,000 miles) from southwest to northeast and 800 km (500 miles) from north to south.

What makes the Gobi Desert in Mongolia a place worthy of any travel bucket list, especially for photographers and videographers, is its unique geography and climate. (Not to mention the highly photogenic herders who call it home!) 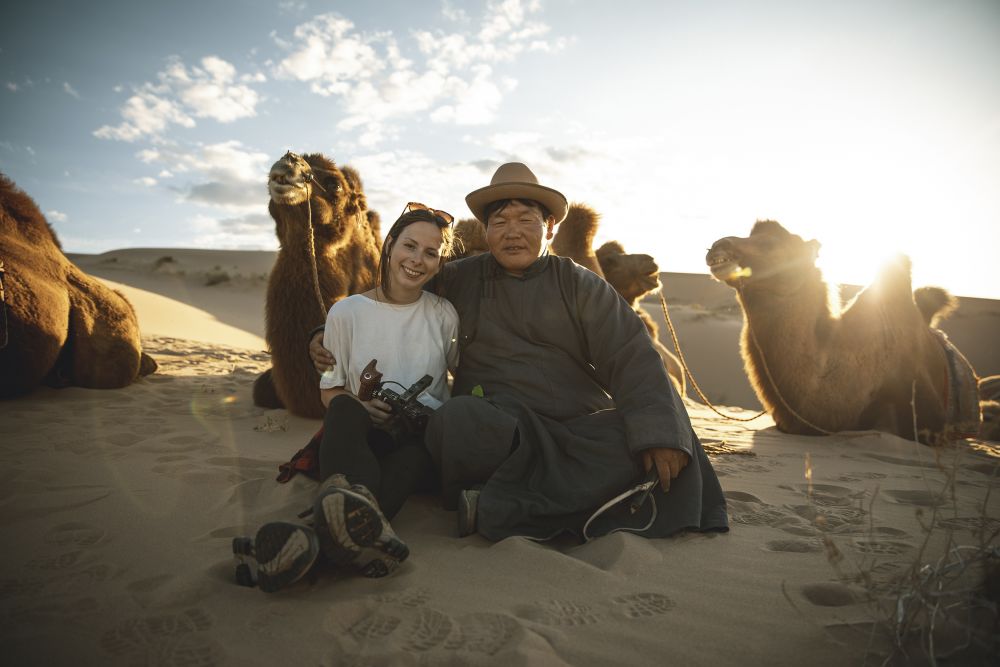 With exposed cliff faces and being one of the few deserts in the world where snow can be seen accumulating on its giant dunes, the Gobi is no ordinary desert, which makes it no regular place to shoot, capture, and explore.

And, teeming with 100,000-year-old fossils – archeologists and paleontologists flock here for the early mammals, dinosaur eggs, and prehistoric stone implements still being discovered here – you never know what surprises lie up the desert’s sleeve.

Listen to this podcast from National Geographic called The United States v. One Tyrannosaurus Bataar for a fascinating – and somewhat heartbreaking – look at what happened when an American explorer’s find ended up at an auction in New York City.

And, while you’ll need a reliable 4x4 to get you to most of it, it’s worth every bump and backroad to get there. Download a reliable offline navigational app before leaving the comforts (and reliable Wi-Fi) of the city. Maps.me works the best across all of Mongolia.

Now, let’s talk about where to go and what spots you won’t want to miss.

Assuming your road trip will be starting from Ulaanbaatar, the country’s capital city, your first stop on this Gobi Desert travel adventure is going to want to be the White Stupa. Or, Tsagaan Suvarga, as it’s called in Mongolian. 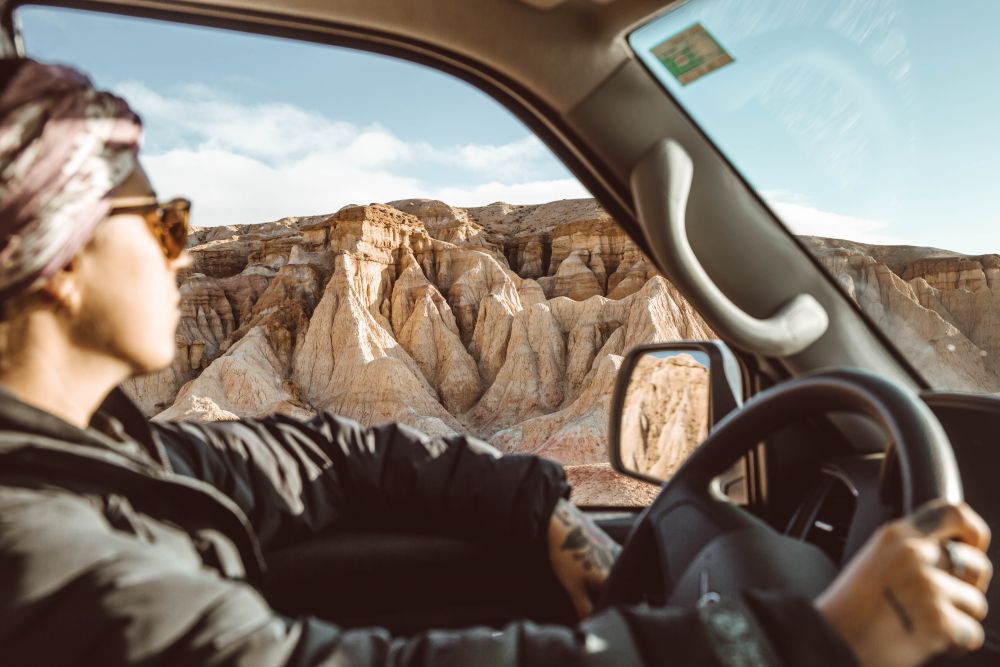 Do yourself a favor and camp at the bottom of the cliffs on your first night out. It will take you 6-7 hours driving to get there from the city, so be sure to give yourself enough time to pick up your rental car and grocery shop before leaving Ulaanbaatar. It starts to get dark about 8:45 pm in the summer and trust us when we say, you don’t want to be making this drive at night.

After heading inland from the main road to see the White Stupa (it’s about an hour’s drive – look for a brown arrow marker on the main highway just before the province ends), to get to your next destination (cough – ice fields – cough) simply retrace your steps back to highway A0202, where you’ll cross from the Middle Gobi into the southernmost Omnogovi (South Gobi) province.

Heading through a checkpoint and toll road (you’ll encounter a few along the way – make sure you have 1,000 tugrik bills on you), you’re officially in the last Mongolian province before reaching China.

In this province, you have the Yolin Am Ice Field, a deep and narrow gorge in the Gurvan Saikhan Mountains that is several kilometers long and can be several meters deep after winter. Making the trek through the ice field shows off the diversity of Mongolia’s geography, where you’re at solid rock cliffs one day, hiking through green fields to an ice cap the next, and then on top of one of the coolest sand dunes in the world the day after that.

After a night camping near the Yolin Am Ice Field, make the drive to Hongorin Els, otherwise known as the ‘Singing Sands’ inside Gobi Gurvansaikhan National Park. These are the famous dunes that we don’t think need much explaining. We’ll let the pictures and the drone videography speak for themselves. (And boy does this one from JustKay , who experienced Mongolia by way of the Follow the Track self-driving tour, do some talking.)

From the dunes, you’ll backtrack slightly to make your way east, and then north, towards the Flaming Cliffs. Or Bayanzag, as they’re called in Mongolian.

A night spent camping at the Flaming Cliffs is magical – especially when you wake up and see the cliffs in all their glory at sunrise. The warm tones, clear skies, and endless landscapes make it one of the most stunning places in the world to shoot drone videography and photography, especially if you’re new to flying a drone and shooting and recording in this style. (Basically, you can’t F*** a shot here up!)

As the last stop on your Gobi Desert Mongolia adventure, take your time and be sure to take in the cliffs for the magnificent formation it is – both day and night. And, don’t forget to be on the lookout for rare animals, including argali sheep, Siberian ibex, snow leopard, beech marten, manul cat, lynx, and – of course – the Gobi camel. 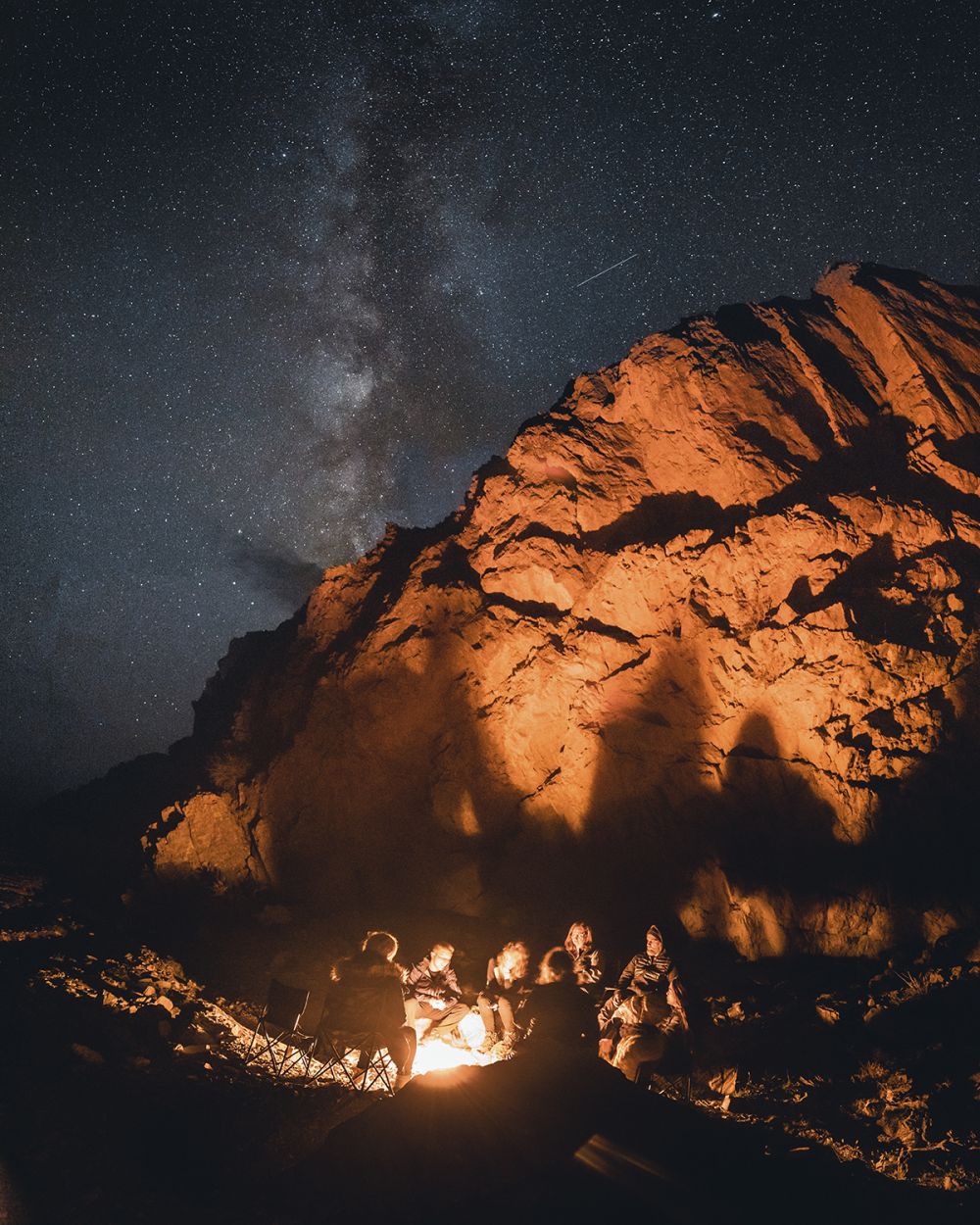 Flaming Cliffs Max Photo (Camping Beside the Cliffs at Night)

Along this route, we promise that it’s almost impossible to take a bad photograph. But, just in case it is, we have a few ways to fix that…

Tips for Shooting Drone Videography in the Gobi Desert, Mongolia + A Free Masterclass

It would make sense that you would want your photos from this trip to be better than anything else you’ve ever shot. So, why not book a tour where you have free access to a photography and drone videography masterclass while you’re at it? (You know what they say – two birds, one stone!)

The Follow the Tracks Camel Route not only takes you on an epic 13-day self-driving adventure complete with a UAZ Patriot 4x4 kitted out with an iKamper rooftop tent, kitchen equipment, and an iPad loaded up to lead you on the best route all along the way, but you also get access to Max Muench’s Photography Masterclass.

The Masterclass is a 40-part series covering everything (and we mean, everything) from photography and drone videography shooting tips and tricks to editing guides and insider knowledge on the business side of being (and becoming) a professional photographer.

Look at it like this. This tour gives you the route, tells you where to stay, hand delivers the navigation points for the best spots for flying your drone in Mongolia, and gives you access to accompanying Masterclass courses that get down to the nitty-gritty of shooting – and shooting extremely well.

Do we have you ready to book a once in a lifetime trip to photograph and video the stunning and diverse landscapes of Mongolia’s magnificent Gobi Desert yet?