Travel to the most visited regions of the country such as Khovsgol province, the Orkhon Valley and the South Gobi. In South Gobi you can see unique landscapes that are home to prehistoric giant reptiles, meanwhile Khovsgol Lake is the famous blue pearl in northern Mongolia bordering Siberia, near many great fishing rivers. Also travel to Orkhon Valley, with its forested  mountain landscape, waterfalls, and temple sites, to visit the site of Kharakorum, the ancient capital of the Mongol empire as well as the UNESCO World Heritage Erdene Zuu monastery. 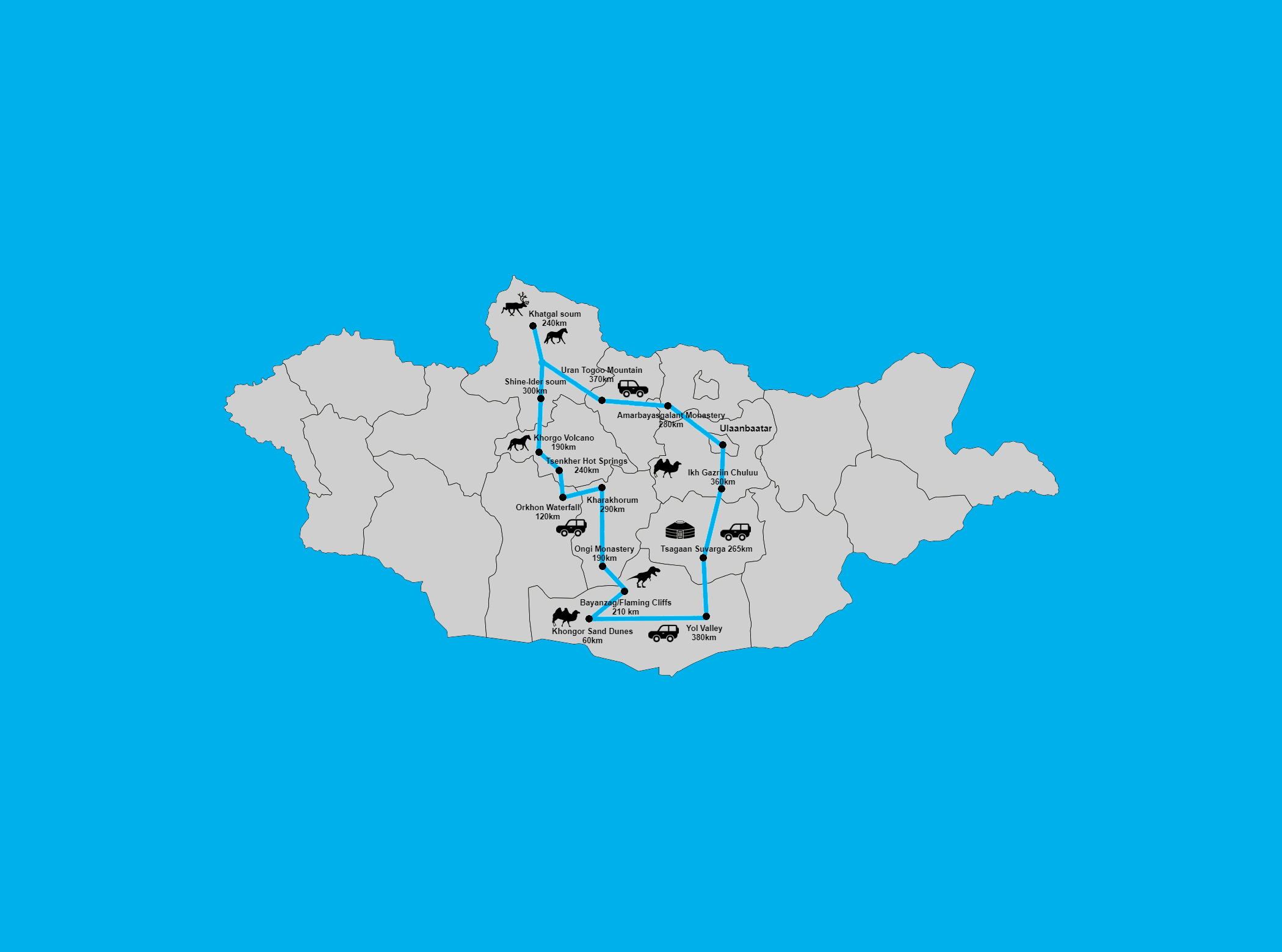 Including all of the Gobi desert, the central and northern Mongolia, you will meet different cultures and nomadic people. Amazing scenery, history, wildlife and adventure is waiting for you on this roadtrip.

(Govi-Ugtaal and Gurvansaikhan soum of Dundgovi province)
Ikh Gazriin Chuluu is a mountain of granite rocks in the Gobi desert reaching 1706m at its peak. This rocky mountain has over 40 caves and the area is a home to over 20 species such as jerboa, eagles, bats, fox, wildsheep and siberian ibex. There are lots of myths about famous as well as infamous people who had nestled in the caves and those caves are usually named after the people once stayed in there.

(Ulziit soum of Dundgovi province)
The rocky formation of Tsagaan Suvarga was an old seabed with sedimentary structure shaped by millions of years of natural forces and the different colors represent different times. You can explore Khevtee Bosoo agui (Lie and Stand Cave) or Del uul (Mane Mountain). Del uul is famous for its Bronze Age rock drawings and considered to be largest site of rock drawings in Central Asia.

(Dalanzadgad soum of Omnogovi province)
Although, Yoliin Am (Bearded Vulture Valley) was originally established to preserve bird life in the region it is nowadays well known for its stunning scenery. You can discover permanent glaciers, endemic plants and rare animals such as bearded vultures, snow leopards, manul cat, beech marten, and mongolian antelope. 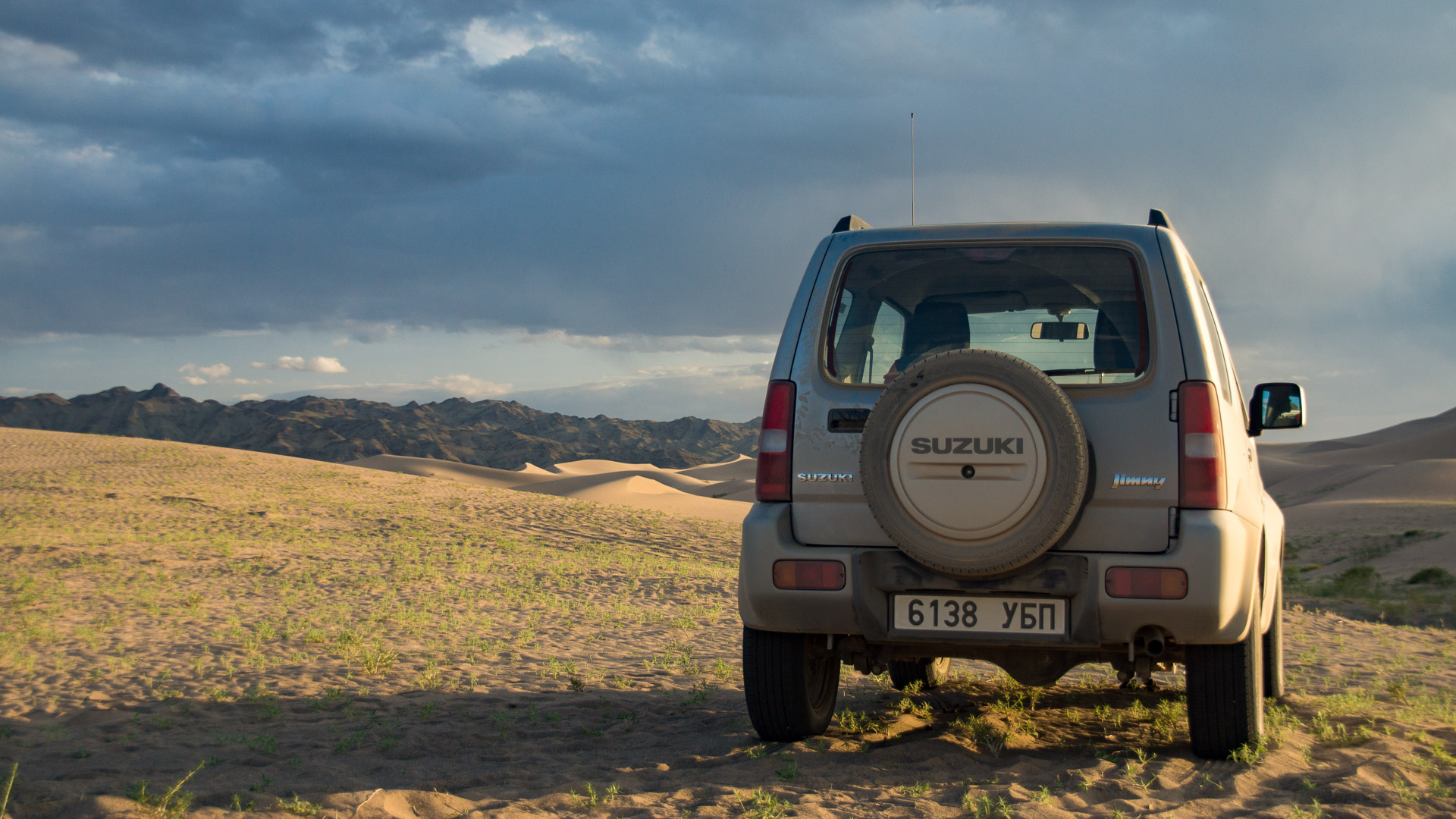 (Bulgan soum of Omnogovi province)
Bayanzag red sand cliffs, better known as “Flaming Cliffs” due to their ochre and red colors, have many sedimentary sand cliffs where numerous dinosaurs’ fossils have been found. Ride through the prehistoric giant reptiles’ home on a camelback and look out for fossils around you.

(Saikhan-Ovoo soum of Dundgovi province)
Formerly one of the largest monasteries in Mongolia, Ongi monastery was founded in 1660. The monastery consisted of two temple complexes and the older one has various administrative buildings as well as 11 temples. Meanwhile, the newer complex which was built in the 18th century, consisted of 17 temples. The Ongi monastery also had 4 religious universities and could accommodate over 1000 monks at a time. Unfortunately, in the 1930s the monastery was completely destroyed and over 200 monks were killed by the communists.

(Kharkhorin soum of Ovorkhangai province)
Karakorum was the capital city of the Mongol Empire between 1235 and 1260, and of the Northern Yuan dynasty in the 14–15th centuries. There is a museum that will unfold the intriguing history of the ancient city. Also, you can visit one of the remaining Buddhist monasteries in Mongolia, the Erdene Zuu Monastery which is located right next to the ruins of Karakorum. 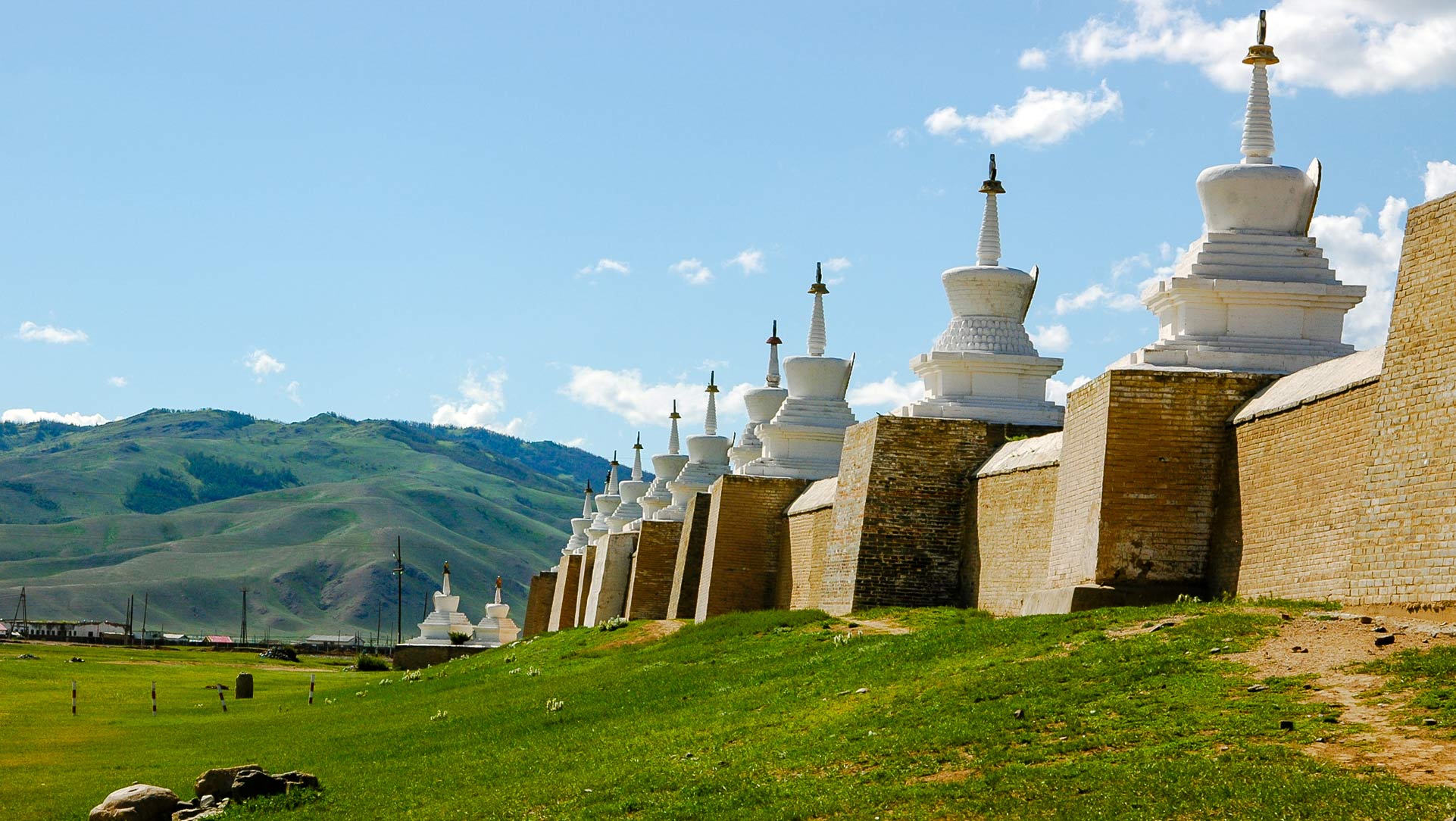 (Kharkhorin soum of Ovorkhangai province)
Orkhon Waterfall is a must see and one of the most beautiful places in Central Mongolia. The waterfall is also known as Ulaan Tsutgalan. If you’re interested in ice climbing, you can come here in winter! The waterfall stays frozen from mid November to late March for about 130 days during the winter. Ice wall is 24m tall and it is formed 85-90 degrees vertical. The waterfall expands significantly during the wet season. 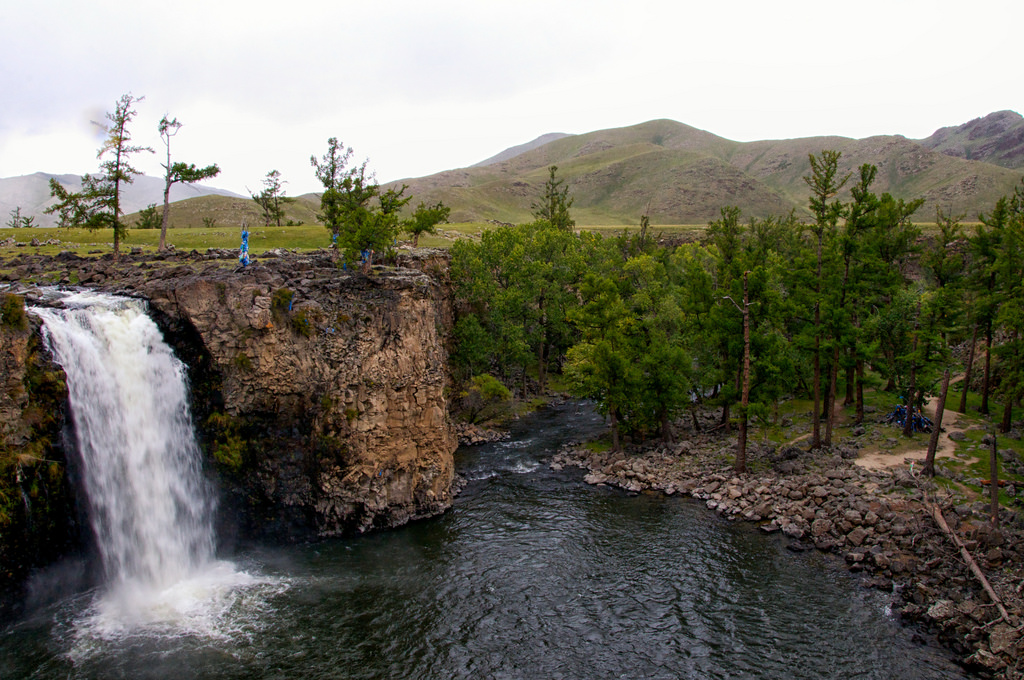 (Tsenkher soum of Arkhangai province)
Tsenkher hot spring are surrounded by cliffs and rivers. According to local people the Tsenkher hot spring have healing properties that assist in treating articular diseases and nerve system diseases. You can relax in naturally heated outdoor water-pools while enjoying the nature as well as indoor baths that are available during winter time.

(Tariat soum of Arkhangai province)
The Khorgo volcano is located to the east of the TerkhiinTsagaan Lake. Together they are the main attraction of the Khorgo-TerkhiinTsagaan Lake National Park. The extinct volcano erupted roughly 10,000 years ago and changed its surroundings once and for all. Most of the area is covered by poplar and peach forest, where wild berries, rare herbs and a great variety of berries and flowers. There are a lot of animals such as deer, wild goat and other animals, as well as various kinds of birds thus it is a great spot for animal photography and bird watching. As for the lake, it remains frozen a big part of the year.

(Khuvsgul province)
You can camp and stay overnight along the Ider river within the territory of Shine-Ider. It’s a brief stop before heading out to Khuvsgul Lake.

(Khovsgol province)
Khovsgol Lake and the area surrounding it is a paradise for outdoor travelers and there are plenty of activities for you to enjoy like hiking, trekking, bird watching, fishing, horseback riding and kayaking. It's inhabited by nine species of fish including the Siberian grayling, sturgeon and lenok and the area is rich with various species of flora and fauna. The region hosts three separate unique nomadic tribes: Darkhad, Buriat and Tsaatan (Reindeer herders). The Khovsgol lake is  great place to enjoy for several days! 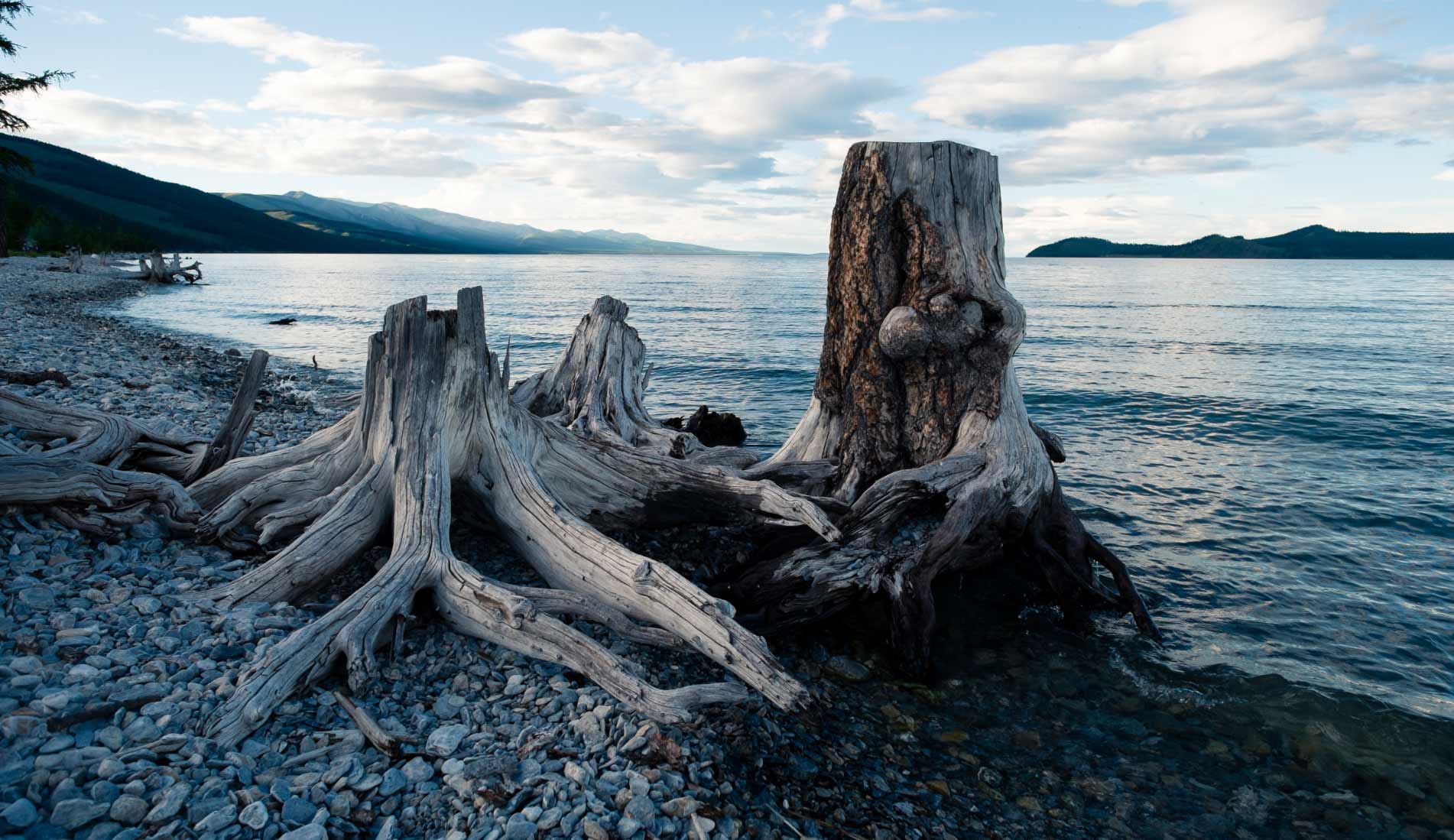 (Khutag-Ondor soum of Bulgan province)
Uran Togoo is also an extinct volcano and it was designated as a Natural Monument back in 1995. On top of the mountain, you can enjoy the unobstructed, panoramic view of volcanic field. In this wild area you can spot owl, cuckoo, sparrow as well as roe deer, wild boar, rabbits, marmot and gopherin their natural habitat.

(Baruunburen soum of Selenge province)
Amarbayasgalant Monastery was built by Manchurian Emperor in the18th century. Dedicated to Saint Zanabazar, the architectural construction of the monastery is picturesque. The main style is Chinese, influenced by Mongolian and Tibetan architecture. Although, Amarbayasgalant was affected by communist purge during 1930s, the monastery partly survived the destruction and it got repaired by UNESCO from 1975 to 1990 until reopening. 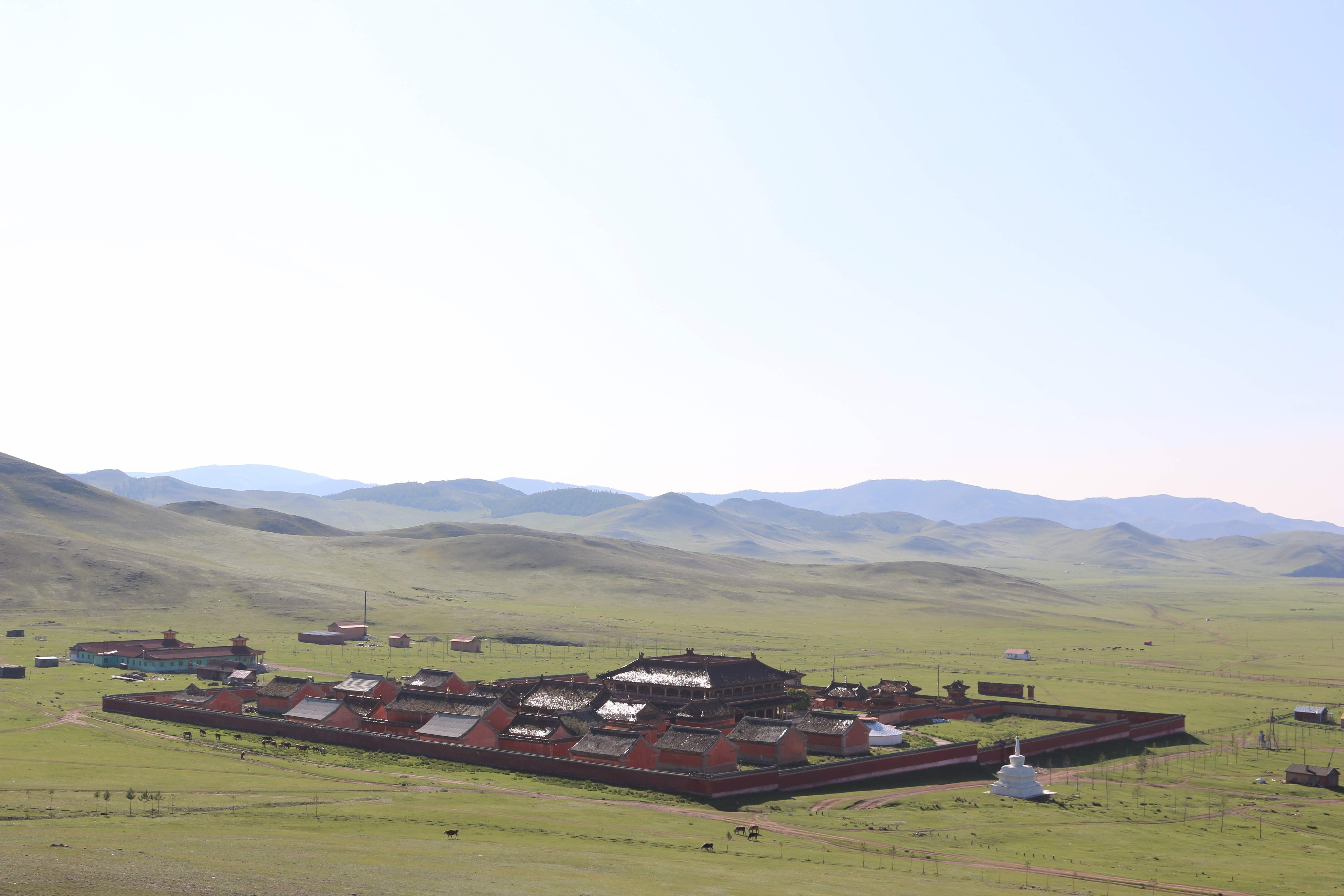 Do you want to escape on the Ultimate Mongolia Roadtrip yourself? Let us know and we will assist you in planning this amazing adventure! Make an enquiry now.