Thinking of Mongolia, many may first envision the vast steppe landscapes and the Gobi desert - barren and dry areas where four-legged friends are particularly comfortable rather than fish or even fisherman. However, it is home to over 4,000 rivers and numerous lakes - and some of the planet's most spectacular fish species. In short: Mongolia really is a true dream destination for anglers!

In this fishing guide, you'll learn everything about fishing in Mongolia: Where and when to fish the best, which fish species are worth going after, what equipment to bring with you and how do you get the proper fishing license. We have also prepared an exemplary route for a two-week trip.

You can and should take this trip driving yourself and you can rent a car from SIXT or you can book a proper car over via Escape To Mongolia.

But first of all it is important to understand the country’s water systems to get a general idea of fishing in Mongolia:

The most important waters of Mongolia are found in central and northern Mongolia and belong to the so-called "Northern Artic Basin".Its masses of water move through the largest Mongolian river, Selenga River, and its connected river systems through Lake Baikal towards the Arctic Ocean in the north.

Orkhon, Tuul, Ider, Chuluut, Eg (runs from the Khuvsgul lake) and Delgermörön River also belong to this system. Furthermore the already mentioned Khuvsgul lake is part of this system, it is by volume the largest lake of Mongolia.

The Pacific Ocean Basin, on the other hand, is located in the Khentii Mountains around Ulaanbaatar. One of the most important rivers of this watershed is Onon River, on which Genghis Khan is said to have grown up - so far the river has almost religious significance for the Mongols. Further south, there is also Kherlen River, which is assigned to this watershed.

In the „Central Asian Internal Basin“ in south / southwestern Mongolia there are mainly flat lakes, which are quite salty due to evaporation. Such lakes, but also real freshwater lakes, are also found in the "Great Lakes Depression" in western Mongolia.

For better overview you can find a map with the different basins and the most important rivers.

Since most of the waters of Mongolia are located in the north of the country, Ulaanbaatar is clearly the best starting point for your fishing trip.

However, which region you travel best should be based on which fish species you want to catch. Leading to the question: Which ones are present in Mongolia?

2. Which fish can you find in Mongolia? 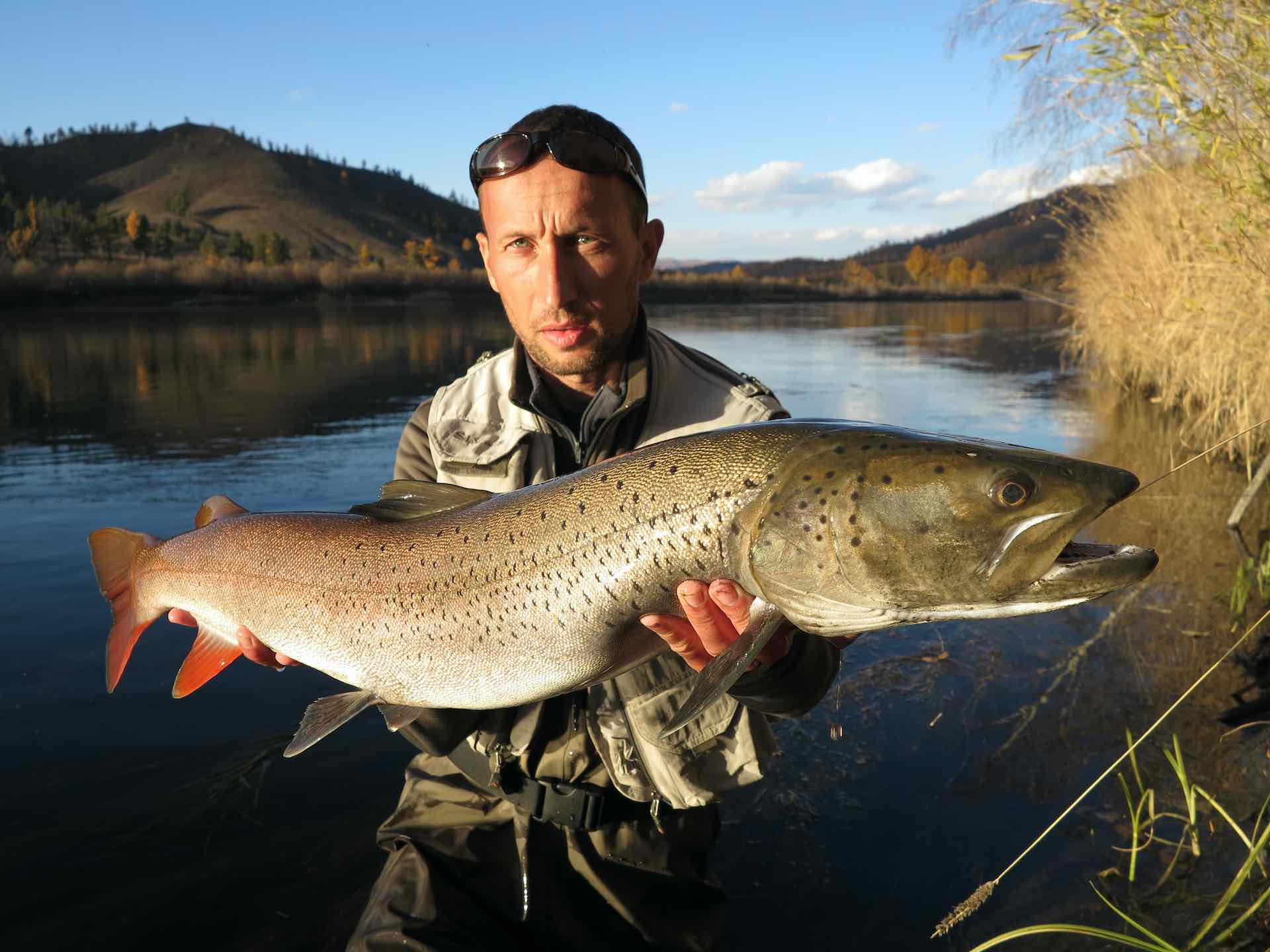 The Taimen may be one of the most legendary fish in the world and has also helped sport fishing in Mongolia gain its worldwide reputation. The Mongolians also call the giant predator "river wolf“ for very understandable reasons and the largest salmonid in the world also plays a special role in Mongolian mythology. A Mongolian legend for example says that once a giant taimen got stuck in the ice of a river during the winter. Hungry nomads feasted on his flesh, but when spring came, the fish climbed ashore, found his tormentors, and ate them all up.

No trout-like fish will grow as tall as the Mongolian taimen and hardly any freshwater fish can amount to the Taimen's fighting strength. And just as ruthlessly he hunts - he does not only go for fish but also for mammals like mice and even birds swimming carelessly on the surface.

As a salmonid, the Taimen is actually similar to a trout that is far too large, the head is a bit more narrow and his body is rounded. The upper surface of the body is olive green or even darker and turns into a reddish brown tail. The tail fin of the Taimen are often dark red and therefore particularly impressive. 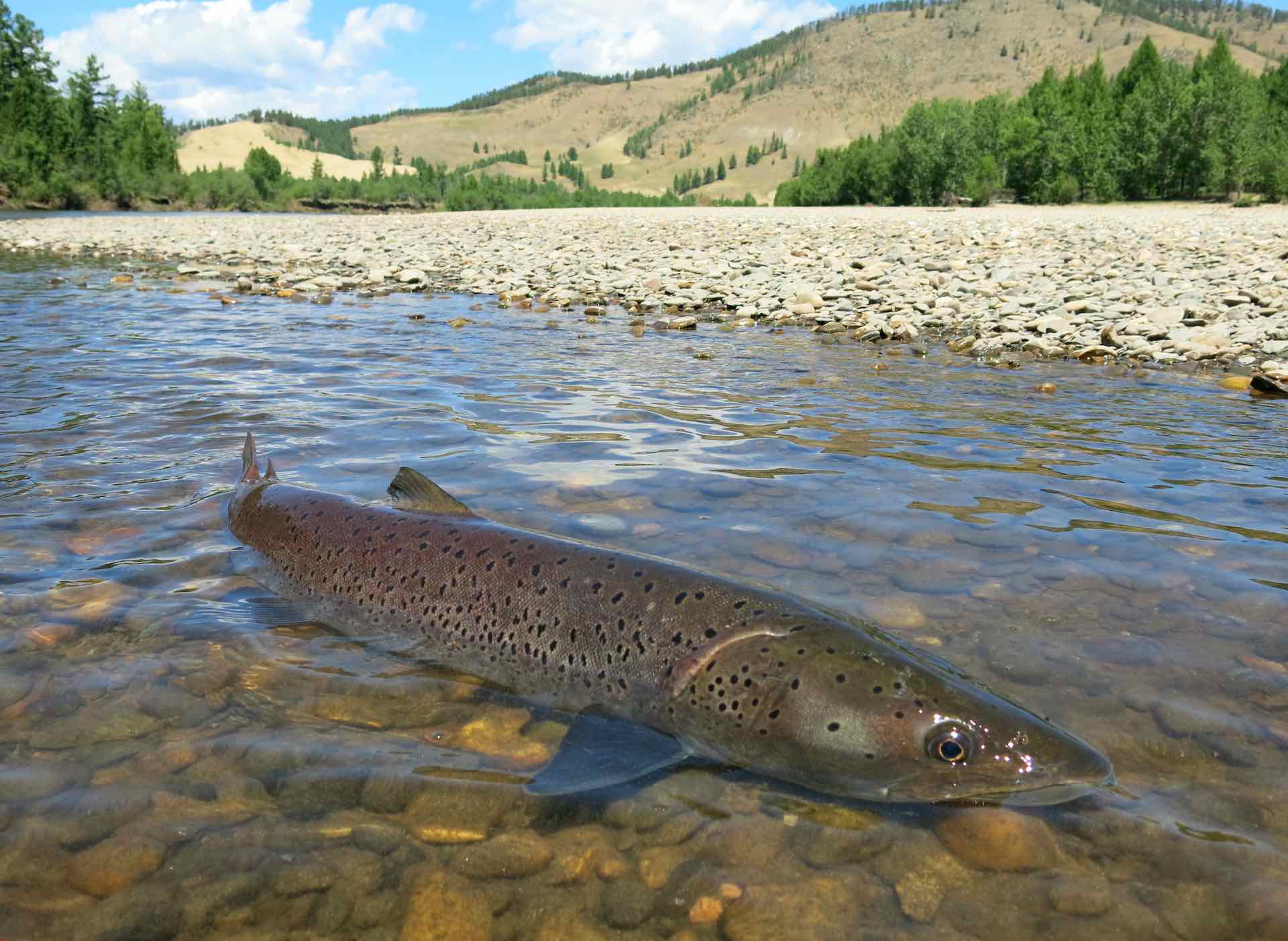 As the largest trout-like fish, the Taimen even putsthe American king salmon to shame: the official world record is a body length of 1.56 meters and 41.95 kilos. However, most of the Taimen are likely to weigh between 15 and 30 kilos and are between 70 cm and 1.20 meters long.

Taimen can be caught with heavy fly rods and mouse imitations that are fished on the surface as well as big popper flies or streamers. With the spinning rod you can use a spoon, a rubber shad or a popper, fishing with bait fish is also possible.

Taimen can be found in both in the Northern Artic Basin and the Pacific Ocean Basin, especially in the Ider, Chuluut, Selenga, Eg, Orkhon, Onon and Delgermörön River.Note: Taimen fishing is only possible with a professional guide, the proper license and only in four of these rivers. 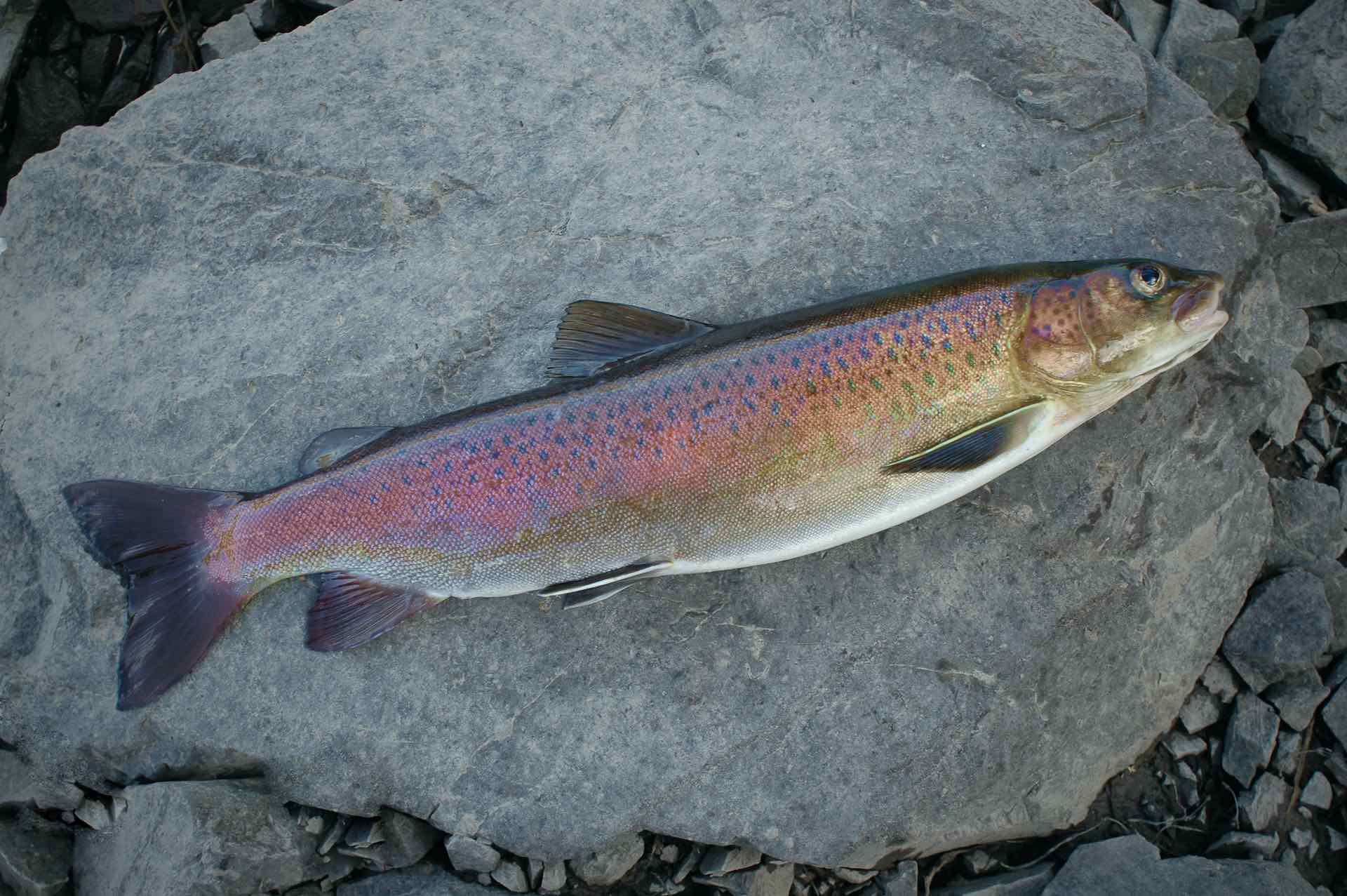 The Lenok trout may not be the best known but probably one of the most popular game fish of Mongolia. Golden-colored, covered with shimmering red and black spots, as well as the distinctive pointed snouts, they are not only beautiful to look at, but often the dominant species: they are found in almost all waters, both in rivers, as well as in the lakes of the "Northern Artic Basin" and "Pacific Ocean Basin", where they, just like Taimen, prefer oxygen rich streams. They can sometimes be found in such great numbers that fishing for Lenok with your fly or spinning rod may seem like child's play.

Lenok will be between 40 and 70 cm tall, with capital specimen reaching 10 kilograms in weight. The pointed nose is a clear indicator that the Lenok is a hybrid between a trout and a grayling. Experts also speak of a kind of "original trout".

You can use the same tactics as on relatively large trout: a dry or wet fly, a streamer, nymph or a spinner, a spoon or a small rubber minnow. It’s quite impressive that larger Lenok attack even large surface baits such as mouse imitations aggressively, even if they were actually intended to attract Taimen. 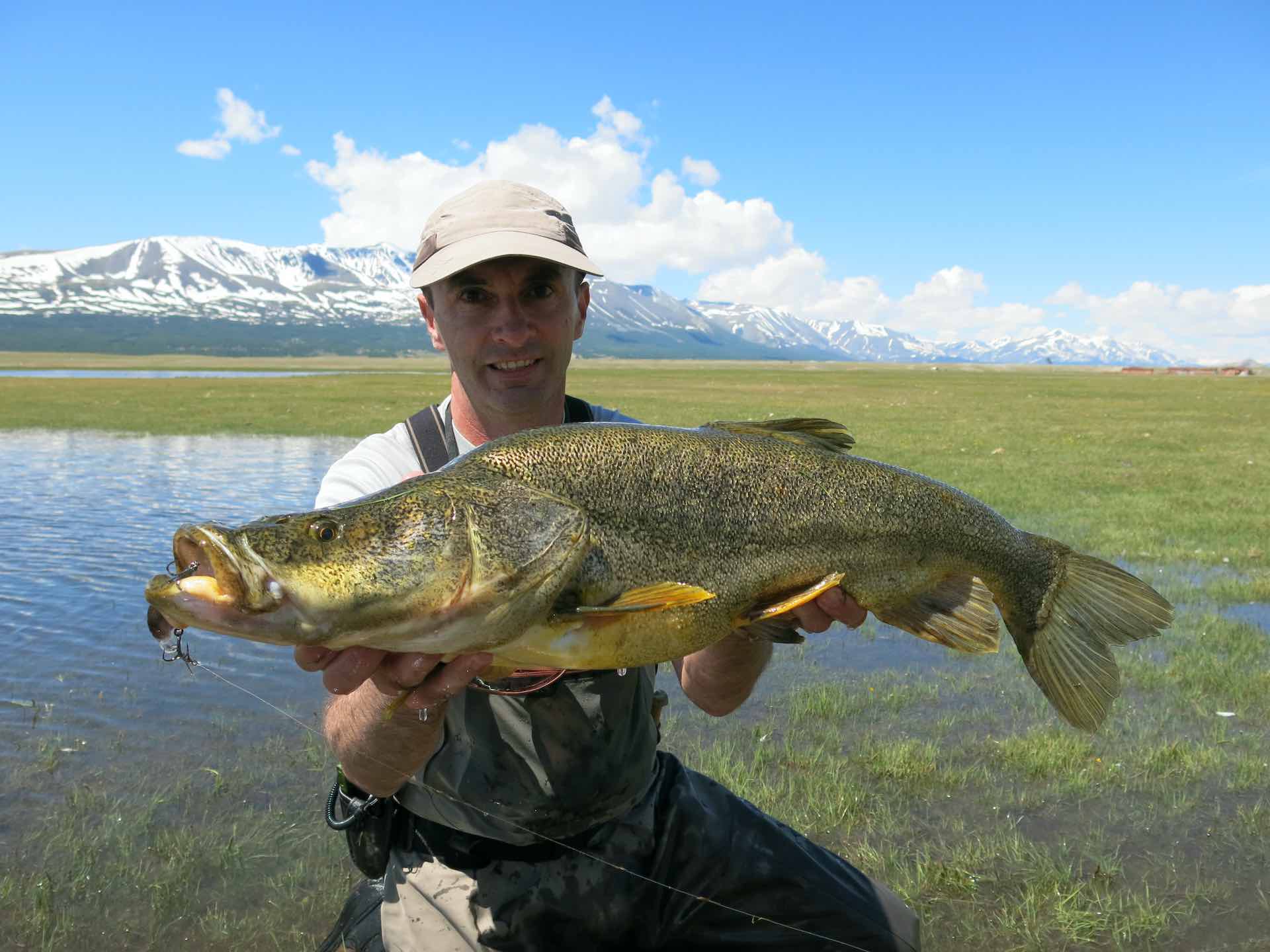 Just because of the Altai Osman Mongolia is worth a trip. This spectacular fighter is only found in the waters of the Altai Mountains of Mongolia and also to a certain extent in southern Siberia. The more exciting it is to catch this relative of the European asp, who can weigh up to 10 kilograms. The saline lakes of the Altai Mountains, but also the Uvs Lake, the Sangiin Dalai and Ust-Nur Lake, but also further south, the Orog Lake are good waters for the stalking the greenish to golden cyprinids.

In general, they are more likely to be found in shallow lakes and possibly connected rivers, and since they prefer water temperatures of 10-20 degrees, they cannot be found in higher elevations.

Like asps, Altai Osman are omnivorous, but as they grow they become predators and can well be caught with the fly rod or with spin fishing tactics. They are preferably caught in shallow water, which is why wading is particularly promising.

As bait use shallow-running wobblers, rubber shads or streamers. Unlike asp, the Altai Osman is a good food and therefore also popular with the nomads. 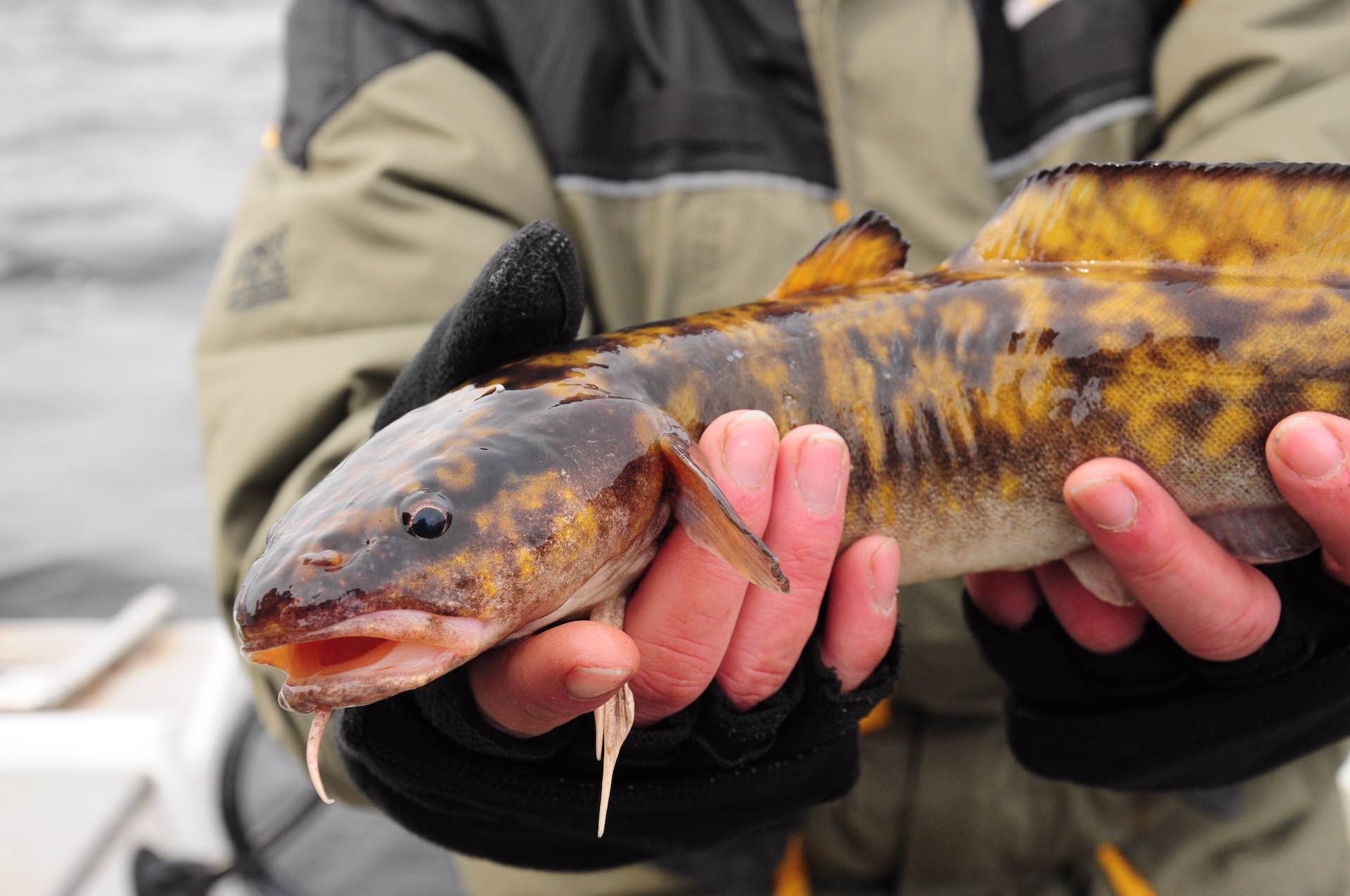 North Americans and Europeans should be familiar with Burbot. And yet, the fish is a rather enigmatic being: As the only representative of the order of cod-like in fresh water, Burbot are especially active shortly before spawning in the cold season and are thus especially well caught during this time. In addition, Burbot are nocturnal and hide during the day, preferably on stony ground, only to later go on a raid for small fish.

Their elongated body has a dark marble pattern on a mostly brown base color, which, however, can also be more yellowish. In Mongolia, Burbot grow up to 70 cm long and can even weigh up to 6 kg.

Due to their preference for cold water, Burbot are especially found in the upper reaches of rivers including the Selenga, Orkhon, Tula, Onon and Kherlen as well connecting rivers. In autumn, burbot travel down into the lakes, such as Terkhiin Tsagaan and Buir Lake. They are also found in Khuvsgul Lake, as they love very deep and calm waters.

The best way to catch a Burbot is to use an inline lead set-up with pieces of fish or worm, which is laid out overnight near rocks and a stony bottom. Since Burbot is particularly good food, fishing for it is quite satisfying. Also, Burbot are often caught ice fishing on the lakes of Mongolia. 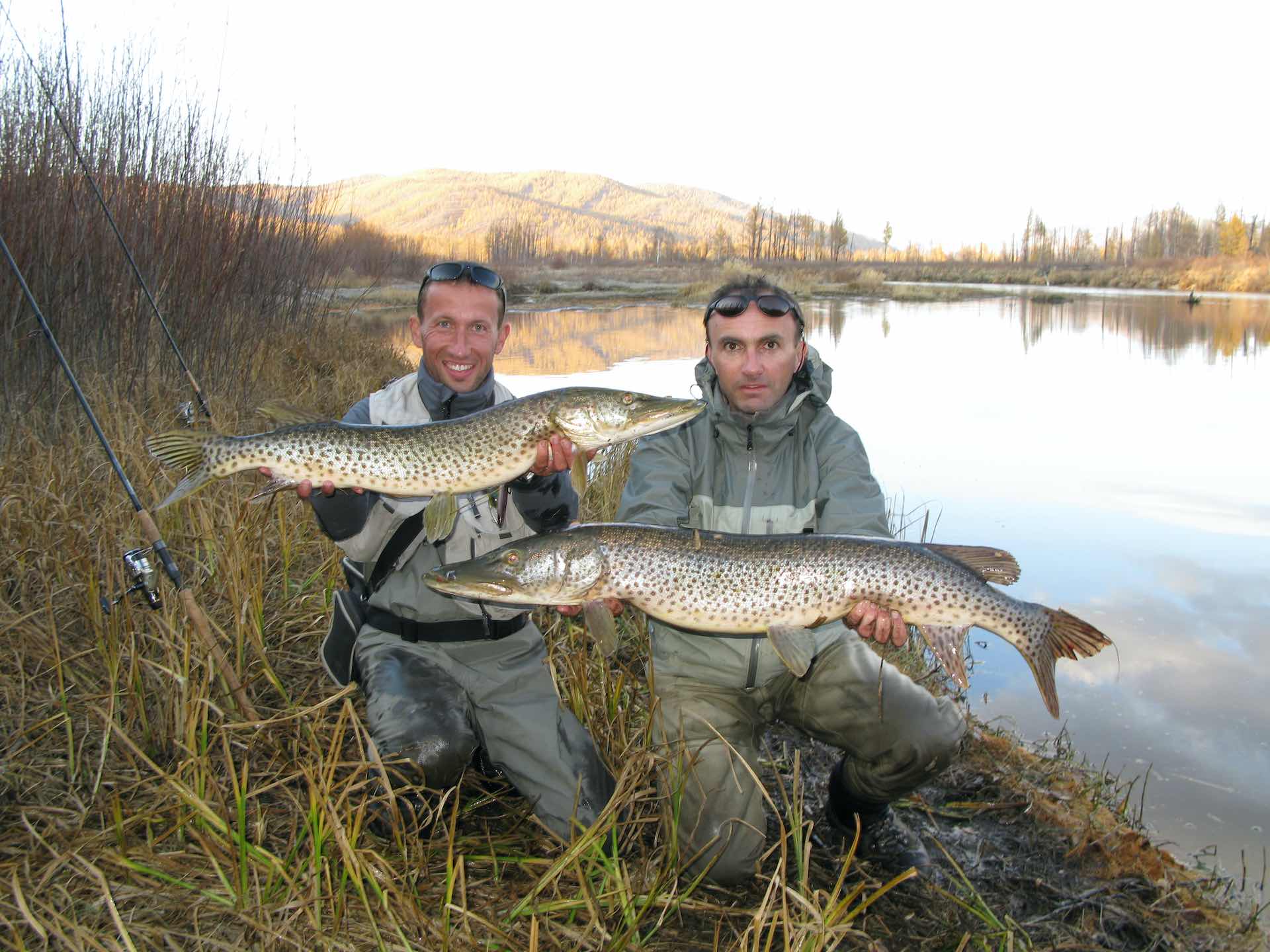 Of course, the well-known Esox Lucius is also native to Mongolia. It can be found in the rivers of the Selenga system and in Terkhiin Tsagaan and Ugii Lake, but e.g. not in Khuvsgul Lake.

Much more exciting, however, is his close relative, the Amur Pike, which is very similar to Esox Lucius, but differs in its light to silvery color and the striking black patch pattern - a beautiful and unique animal.

The Amur pike can be found, as its name implies, exclusively in the Amur river system / "Pacific Ocean Basin": For example, in Onon, Kherlen, Balzh, Barh and Halhin River, as well as Buir and Bayan lake. In the rivers, it is mainly found in calmer areas and backwaters, as pikes tend to avoid direct current.

Both pike species reach sizes of about 1.20 meters and about 12 kilograms. The best way to catch Esox is with a spinning rod and wobbler, spinner, rubber shad or spoon, while heavy fly fishing with a streamer can be especially entertaining. 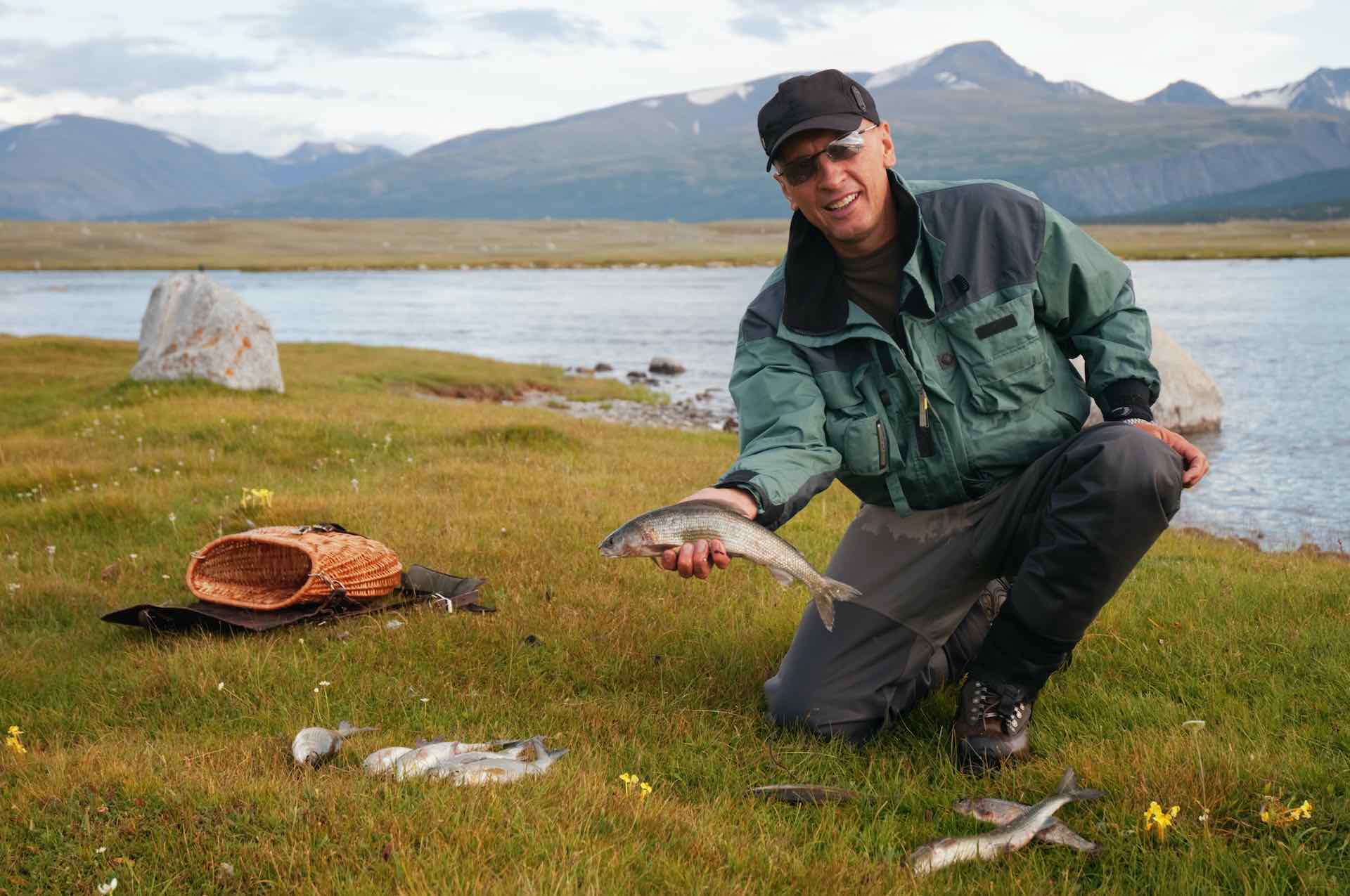 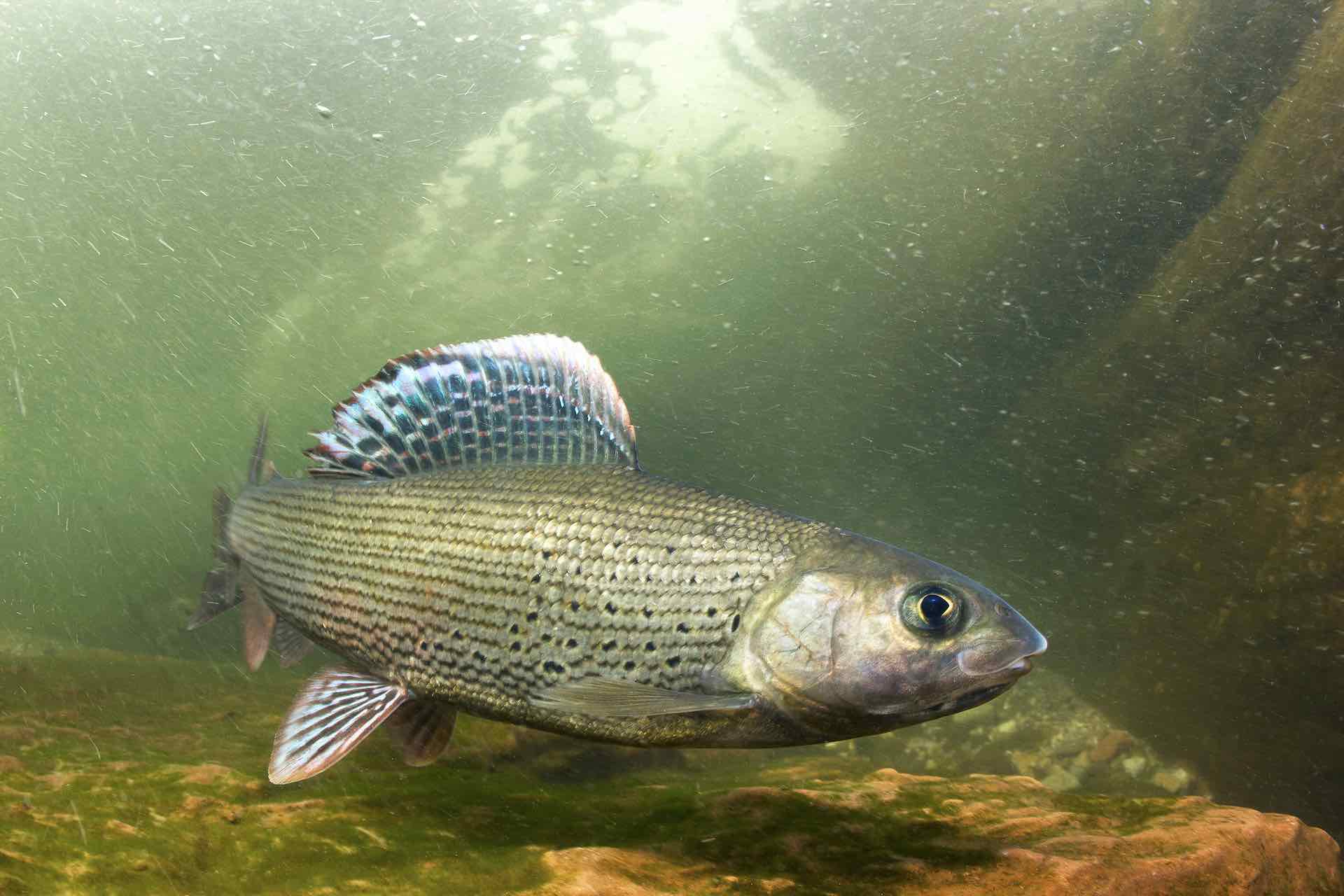 Among fly fishermen, Grayling is especially popular for its unique appearance with its distinctive and colorful dorsal fin. There are five different species in Mongolia, two of which are endemic: the Mongolian Grayling (found in the inland waterways and lakes of the Altai Mountains), and the dark colored Khuvsgul Grayling, which can only be found in Lake Khuvsgul.

In addition, there are Baikal Grayling, the comparatively small Amur Grayling and the "Upper Yenisei Grayling", which is found in the river systems running towards the Arctic Ocean. Compared to the well-known Arctic Grayling, this species has a distinct yellow-colored tail.

In the summer time you catch Grayling preferably in the rivers of the cooler mountain regions, in the autumn it travels into connected lakes.

Hardly any other country has such a wide variety of Grayling, which draws fly-fishermen from all over the world to Mongolia. You catch them preferably on a light fly rod with nymph and dry fly, larger specimens and especially the Mongolian grayling can also be caught spin fishing with spoons and rubber shad.